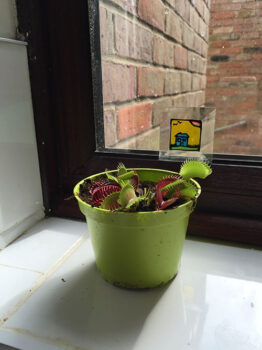 The Venus Flytrap has got to be one of the most fascinating house plants that you could own. When you’re used to feeding your plants normal plant food who wouldn’t get excited by the thought of a plant catching insects that wander into its path and trapping them, before slowly digesting them.

Taking on the challenge

A plant like this isn’t a walk in the park – it’s quite demanding in its care. I decided to buy one and see how I’d get on with it. They’re actually quite easy to get hold of – a quick visit to my local Homebase and there were lots for sale. Plants can be neglected in stores like this so choose your plant carefully to make sure you get a healthy one.

Once I  brought it home, I had to make sure to find the right spot for it – it needs plenty of sunlight and an area where it won’t be too cold. The actual plant is quite small, the pot is 6cm high and 10cm wide. I’ve tried it out on the kitchen window sill to see how it gets on and so far it seems to be doing well there.

You could say it was a battle of conscience: being a vegetarian and raising a meat-eating plant. But you can’t feed a Venus fly trap normal fertiliser, as you would most plants. It will need insects if it is going to thrive. It’s pretty much what it’s designed for. When you look at the traps on the end of each stalk they’re perfectly made to catch anything walking or flying into them. 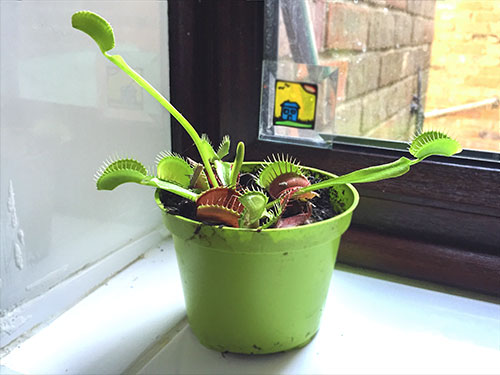 You can see in the photo the new traps that have grown in the month that I’ve owned it. They’ve grown much farther in an attempt to catch more prey. The new ones are a completely different colour to the more mature traps. It’s meant to be normal for new growth, with more light and time they change to purple. 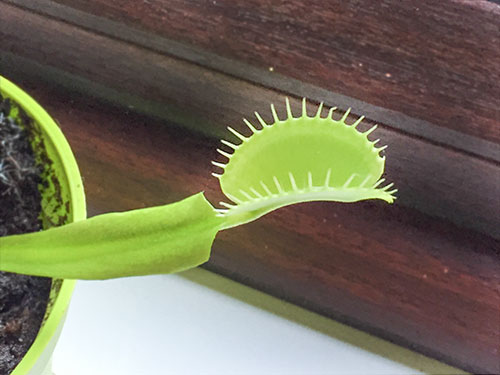 It’s best for the fly trap to catch live insects. When an insect or fly comes into contact with the trap it slams shut, trapping it inside. The enzymes in the plant digest the insect from the inside out, taking out the nutrients and then leaving behind a carcass that, when the trap reopens, can be blown away with the next breeze.

The moth in the image was actually dead when I fed it to the Venus fly trap.  However, it’s generally better to catch live insects, and, weirdly, putting them in a container in the fridge for a while. This stuns them, making it easier to feed them to the trap. Of course, once it slams shut there’s no escape for them. Sometimes the trap doesn’t always close, especially if the insect doesn’t move, so you might have to massage the sides of the trap slightly to help it along.

I’ve tried when possible not to use tap water when watering the plant. The flouride in the water can be bad for it, apparently. It’s best to use rain water but when there’s been none of that to hand I try to keep a bottle of tap water around that has been left standing for a day or two to allow chlorine and other deposits to dissipate. You also can’t use normal potting soil – it contains nutrients that damage the plant’s roots. Unenriched peat moss is one option if you need to pot the plant on.

What next for the Venus fly trap

Eventually the leaves and traps will begin to die off. Actually, the traps will die once they’ve opened and closed a few times which is why it’s best not to do it just out of nosiness to see how they close. Eventually, though, the whole plant will enter a dormant phase that lasts between 3 and 5 months. Mine hasn’t begun to yet but pretty soon it’ll stop growing and its leaves will begin to turn black and die. Often people think they’ve killed their plant but it’s part of its lifespan – after it’s dormant months it will rise again, ready to catch more prey.

We use cookies on our website to give you the most relevant experience by remembering your preferences and repeat visits. By clicking “Accept”, you consent to the use of all cookies.
Cookie settingsACCEPT
Manage consent

This website uses cookies to improve your experience while you navigate through the website. Out of these, the cookies that are categorized as necessary are stored on your browser as they are essential for the working of basic functionalities of the website. We also use third-party cookies that help us analyze and understand how you use this website. These cookies will be stored in your browser only with your consent. You also have the option to opt-out of these cookies. But opting out of some of these cookies may affect your browsing experience.
Necessary Always Enabled
Necessary cookies are absolutely essential for the website to function properly. These cookies ensure basic functionalities and security features of the website, anonymously.
Functional
Functional cookies help to perform certain functionalities like sharing the content of the website on social media platforms, collect feedbacks, and other third-party features.
Performance
Performance cookies are used to understand and analyze the key performance indexes of the website which helps in delivering a better user experience for the visitors.
Analytics
Analytical cookies are used to understand how visitors interact with the website. These cookies help provide information on metrics the number of visitors, bounce rate, traffic source, etc.
Advertisement
Advertisement cookies are used to provide visitors with relevant ads and marketing campaigns. These cookies track visitors across websites and collect information to provide customized ads.
Others
Other uncategorized cookies are those that are being analyzed and have not been classified into a category as yet.
SAVE & ACCEPT